Take a course with me for free

Enroll in the Handmade Skin Care for Beginners E-Course

Learn what causes a white film on cold process soap, how you can prevent it, and if a soap with white film is safe to use.

You’ve made the most beautiful cold process soap, complete with killer swirls and an amazing scent. You can’t wait to take it out of the mold, cut it into bars, and admire your handiwork.

After letting it set a day or two, you’re disappointed to see that your beautiful soap is not quite so beautiful anymore. The soap bars have a layer of white film across the surface, effectively covering up your lovely swirl job.

What the heck is that white film on cold process soap? And what can you do about it?

That weird, white film on cold process soap that develops on the surface of the bars is called soda ash. It generally appears during the first few days after making your soap, either while it’s setting in the mold or just after you’ve cut and during cure.

Soda ash happens to nearly every cold process soap maker at some point in time.

The good news is soda ash doesn’t affect the safety of your soap or how your soap works. It’s completely harmless. It may be ugly as heck, but harmless.

Soap with soda ash is perfectly safe to use.

In fact, the white film will wash away during the first use or two.

What Causes Soda Ash On Soap?

There are a few different reasons why soda ash, or a white film, may appear on your soap.

The consensus is that soda ash is sodium carbonate, which forms when lye reacts to carbon dioxide in the air during saponification. This explains why soda ash only appears on the surface of your soap bar, or any edges exposed to air, and never in the middle of the bar.

(If you have white streaks in the middle of your soap bars, they are a different sort of problem; most likely glycerin rivers.)

In a perfect world, if you protect the surface of your soap from air during the entire time of saponification it should technically prevent soda ash. But, this isn’t always the case.

There are other factors that contribute to soda ash development.

The funky thing about soda ash though, and the reason it plagues soap makers so, is it’s so sneaky. You can make a batch of soap that turns out perfectly, but make the same recipe in the same way a few weeks later and it will ash.

In my experience, temperature plays a role in soda ash development.

Soaping at cooler temperatures (under 85 degrees) seems to trigger it. So do big fluctuations in temps during the saponification process.

For example, you may have more problems with soda ash during the winter and very rarely in the warm summer months.

Pouring at Thin Trace vs. Thick

It’s my hypothesis that soap poured at a thicker trace is able to generate more heat making temps are more stable after the soap batter has been poured into the mold versus soap poured at thin trace. Gelling the soap seems to prevent ashing.

Some fragrance oils trigger soda ash, but this is probably the least common trigger.

How To Prevent Soda Ash on Soap

Although soda ash may still pop up every now and again (it is sneaky after all!) there are a few things you can do to prevent it. Experiment with a few of these and see what works best for you.

Try mixing your lye water and oils together when they’re both between 110 to 120 degrees.

If you make milk soap, though, you don’t want your mixture that hot. Instead, blend at about 90 to 95 degrees. This works for me, but you’ll want to experiment with your recipe.

Keep the Soap Warm Throughout Saponification

Keep your soap nice and warm during the saponification process. Insulate your soap mold well with a few towels or a thick blanket, especially during the wintertime.

Pour at a Medium to Thick Trace

You’re looking for thick gravy to nearly pudding consistency. This really makes a HUGE difference for me!

Protect The Soap From Air

After pouring, protect your soap from air during the entire saponifcation process, until the soap has completely cooled. This is the most effective way to prevent soda ash, in my opinion.

Put a lid on your mold before you insulate. My “lid” is just a thick piece of plywood I place over my mold. Make sure the lid isn’t actually touching the surface of the soap, though.

In cooler weather, or in soap recipes that I’ve had problems with ashing before, I leave soap in the mold for at least three entire days, and often more than a week, before uncovering.

The batches which I rush and open the lid earlier come out of the mold beautiful only to develop ash hours later. Again, this happens mostly in the winter months so I speculate it’s a temperature fluctuation thing.

Pin to save this info for later! 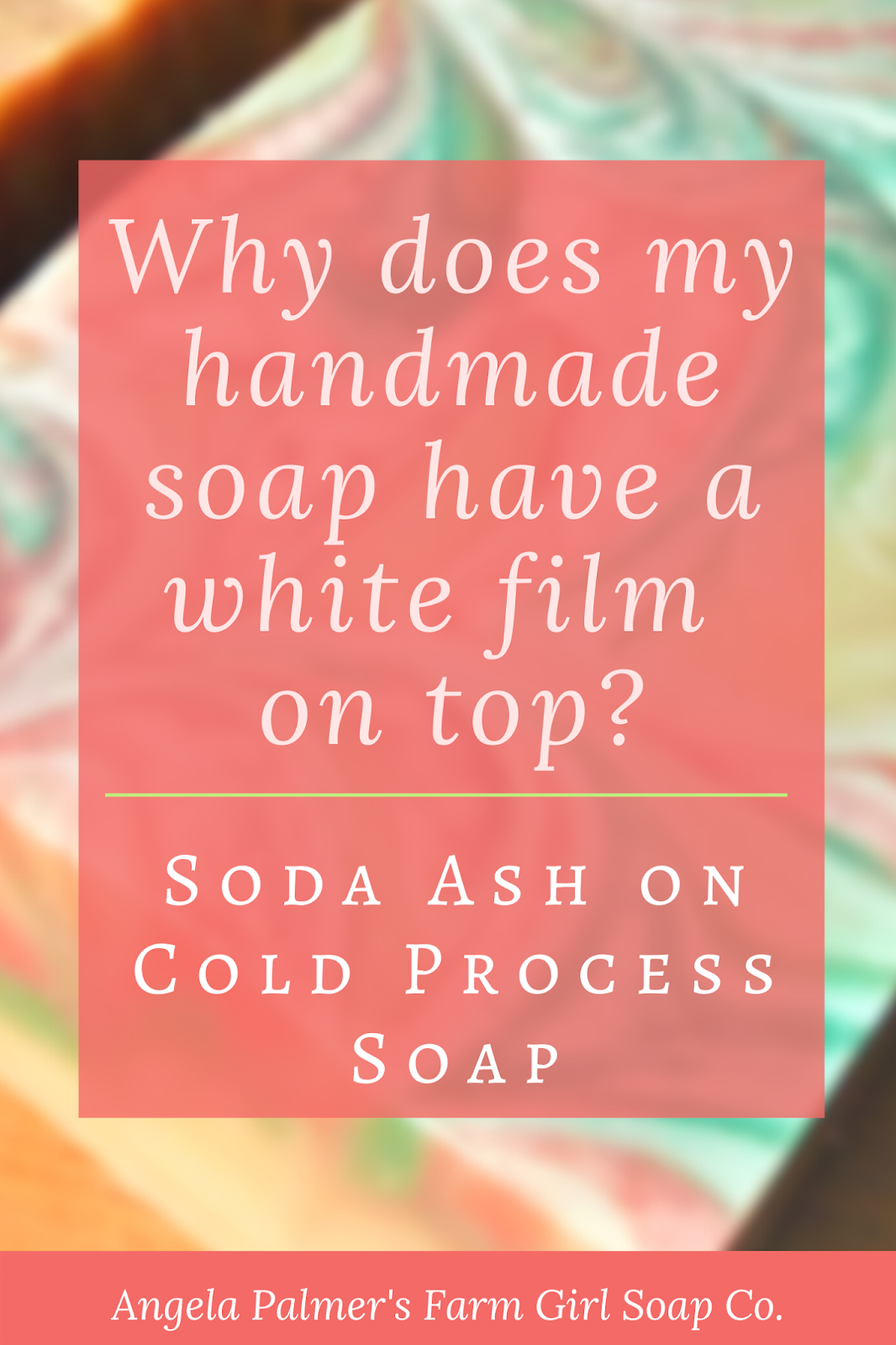 Things That Don’t Work to Prevent Ashing (In My Experience)

These soda ash fixes are commonly recommended and, while they may work for other soap makers, they were big duds for me. I DON’T recommend:

Spraying the surface of the soap with rubbing alcohol right after pouring. This never made a lick of difference.

Covering the surface with plastic wrap. Yeah… no. It’s incredibly messy and ruins the pretty surface of the soap.

Adding a touch of beeswax to the recipe. I never had a worse case of soda ash as in the soap I made with beeswax.

How To Remove Soda Ash From Your Soap Bars

Even with careful soaping, there will be times that your bars ash. If it hasn’t happened to you yet, it will one day.

Since soda ash is purely cosmetic, you can use those bars as-is, ash and all. You won’t notice a difference.

But there are a few things you can do to remove ash from your bars and get them looking all pretty again.

I’ve also had good results with steaming the ash away. Quickly run the ash-ridden surface through the steam from a tea kettle. Be careful you don’t burn yourself, though.

If you have a soap planer, you can also shave the affected areas off.

Instead of getting bummed over soda ash, you can just learn to embrace it. I used to hate soda ash, but my perception is changing.

This change of heart came after I saw a soap maker at a craft fair who used soda ash to her advantage, creating the loveliest soft purple bars with textured and ashed tops that were To. Die. For.

It made me look at soda ash in a different way. Although I don’t always love it, I can appreciate it as part of the charm of handcrafted soap.

If your soap has ashed, try to enjoy the rustic beauty of your bars even if they didn’t turn out exactly like you envisioned.

Because you made soap….

And that’s pretty awesome, ash and all.

So, I know you’re already a soaping sensation. But…

How much do you know about crafting your own all-natural facial, bath, and body products?

Sign up for the FREE Handmade Skin Care for Beginners E-Course and learn how to create your own herbal skin care products with simple ingredients you have in your kitchen right now.

Just enter your info into the form below to get started.

Sign up for the Handmade Skin Care for Beginners E-Course and learn how to make 7 easy, all-natural skin care products with simple ingredients you have in your kitchen.

Enroll for free and get the lessons sent directly to your inbox.

By signing up you’ll also be subscribed to my newsletter. No spam ever, unsubscribe at any time.

Enroll in the Handmade Skin Care for Beginners E-Course and learn how to make 7 easy, all-natural skin recipes with simple ingredients you have in your kitchen right now.

Sign up to get the lessons sent to your inbox.

Life is better on the farm!

I'm passionate about teaching others how to make their own DIY herbal skin care products. Sign up for my free e-course to get started! Enroll now for free

This error message is only visible to WordPress admins